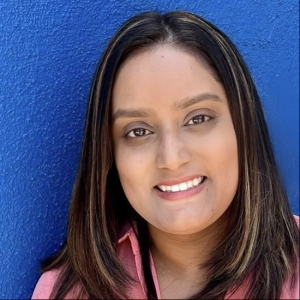 Priya is a native Californian. As a child, people would tell Priya she had a funny bone. She became so concerned about this that she took a career in healthcare to find a cure. She’s still searching for a treatment plan. Priya found her way to Improv so she could be more relatable to the Hipsters. Priya gave up her mom jeans for skinny jeans but can someone please let Priya know if it is “hip” to wear a knit beanie or a fedora hat these days? Priya loves spending time with her family, being married to the “Bard of Devon”, pretending to be Irish, figuring out the difference between string theory vs string cheese, and oh yeah, Held2gether. Finally, Priya is the COO of her aunt’s matchmaking business. So if you are interested in finding love please contact us at 1-800-Held-2-gether. Remember, all sales are final. 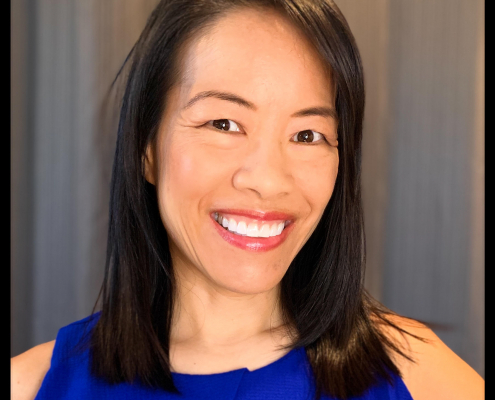 Agnes is the mom to 37 kids. She first broke into television in 37 Kids and Counting. People Magazine calls her the next Kris Jenner with her kids starring in This Is Us, hosting The Late Late Show, and occupying every minor role on the Disney Channel. She currently stars in The Real Housewives of Long Beach. Agnes has performed in many Held2gether firsts including the first scripted play, The Eight: Reindeer Monologues, the first Stand-Up Comedy Showcase, and the first improvised Superhero show. She’s a showstopper. The shows stop after their first and only performance with Agnes. Her improv career first started while growing up in Long Beach where another troupe member’s mom used to babysit her. Agnes moved to New York for college and stayed busy writing and starring in a Tony Award winning musical about one of the Founding Fathers. She threw away her shot and moved back to Long Beach to join the Held2gether Troupe and be cared for by her old babysitter. 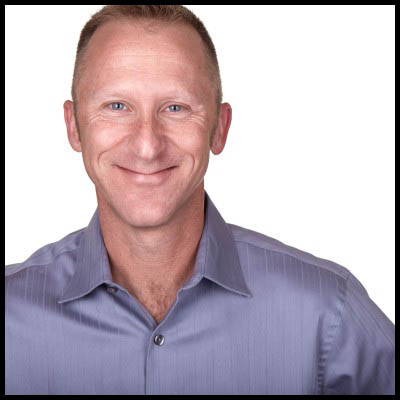 Darren was cemented into the entertainment industry when he was asked to become Justin Timberlake’s body double. After numerous female maulings and assassination attempts, he decided it was much safer to direct other unsuspecting people into peril on stage. His favorite hobbies are broccoli separating, skipping to “Come on Eileen” and hugging. He’s found all of these things to be extremely helpful when directing his troupe, particularly on the days when Mercury is in retrograde. 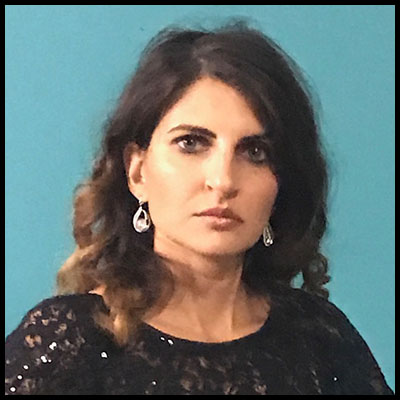 Zarina Hora was raised on the mean streets of Queens, NY.  She used to be known as  “Z from the block”  and spent her early years kicking other neighborhood kids in the shins and then running away. There are at least two other troupe members from New York but they don’t count because they are from “upstate” which is really not NY at all. Zarina started her career as an elementary school teacher but after doing it for three years, decided  it was way too hard and needed to do something easier. So she went to law school. It was a good decision because she realized that attorneys are not as cruel as 3rd graders. Zarina has a marriage of convenience since she has two cats and doesn’t want to be considered a crazy cat lady (having a husband is a great way to fool others into not thinking you are normal). Zarina enjoys improv because she gets to be different people with different personalities on stage which her therapist tells her is more acceptable than having different personalities in real life. 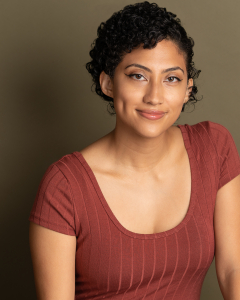 Liz is a Blackapino (Black & Filipino) improviser who grew up in San Diego and found her way to Long Beach via the 405. She enjoys copious amounts of sugar and caffeine. She is an aspiring beatboxer and harmonica player. By aspiring she means she can’t do either of those things. Yet. 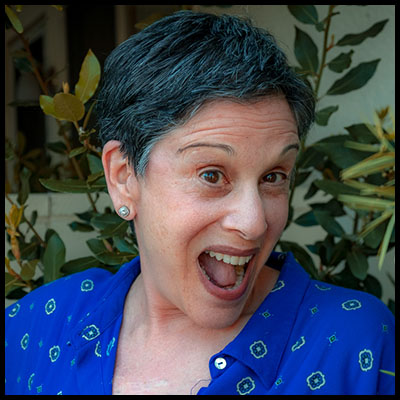 Ann has underwear older than many of her troupe members. Yet she still refuses to act her age.  Settled here in Long Beach for seven years, Ann is thrilled to have found her kooky comrades of Held2Gether.   Ann spent her early years in New York City where for 35 years, she wore mostly black, got everywhere on the  Subway and leased a succession of rent stabilized apartments.  Now in California, Ann can be seen wearing actual colors.  On the rare occasion that Ann in fact walks somewhere, she marvels at herself waiting for the WALK light before crossing the street. Ann would like to thank the Long Beach Unified School District for her salary and her union for collectively bargaining on her behalf.  Deep bows to Darren, Scott and the Held2Gether Company for their faith and patience.  Lastly, Ann would like to thank the universe for locating the Company in Long Beach where she can exercise her performance muscles without ever having to get on the 405. 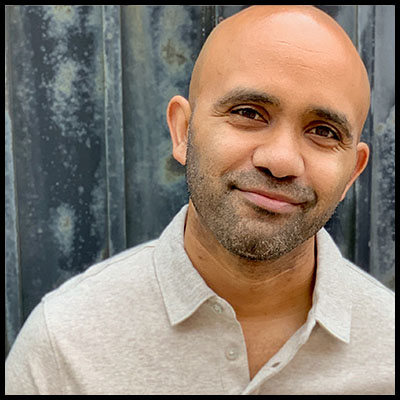 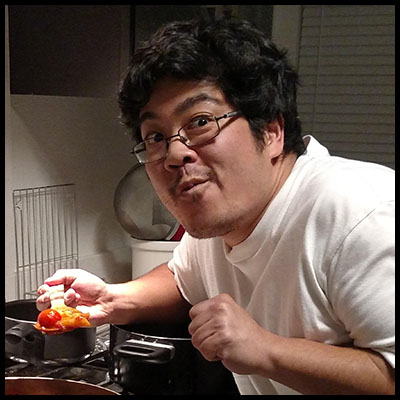 The Neil is a humanoid creature that exists to eat, sleep, and consume memes.  The Neil is native to the San Gabriel Valley but has been seen as far out as the wilds of Sacramento.  Current migratory patterns have seen the Neil in the Long Beach area integrating itself with the indigenous improv scene.  If you see one, don’t panic.  He is relatively harmless and will only approach if he is foraging for food or video games.  The Neil is a good source of nerd lore and is a good sacrifice on any adventure to show that the story is getting serious. 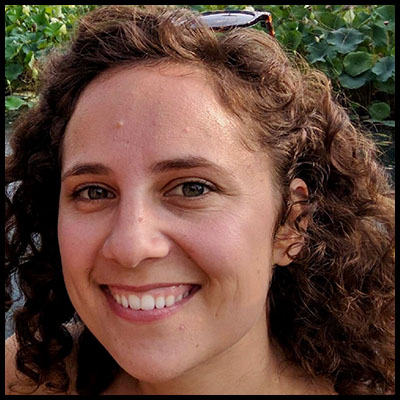 From her fourth year until her third decade on this planet, Sarah masqueraded as a shy, demure wallflower. Then, she stumbled into a held2gether class wherein the dammed-up reservoir of insanity began to pour forth from her. Now, she delights in playing with other “grown-ups” on stage and in her self-ordained role as an improv evangelist. She loves held2gether and all the humans in it for allowing her to exorcize her demons with them on stage. 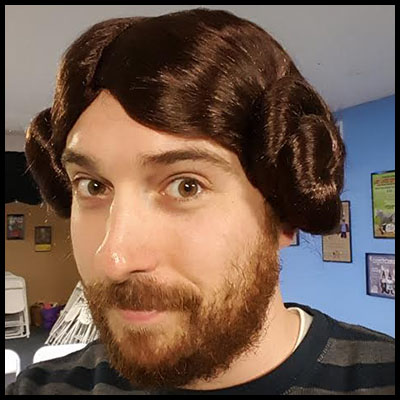 Cael tells us he comes from Saratoga Springs aka “Upstate” New York. For some reason he thinks anyone cares about there being parts of New York other than the big city. Spoiler alert: we don’t. In 2008 Cael decided that he needed to find some adventure, so he packed up his car and just started driving. Eventually he made it to San Diego and finally found his way to his new Held2gether home in Long Beach in 2011. Like a fool, he first enrolled in classes at Cal State Long Beach to become an “engineer.” In 2015, once he was done wasting his time getting his “engineering career” in order, he finally got his head about him and stumbled into his first level 1 improv class with the legend herself: Kendra Nicholson. From there it has been a whirlwind of a ride full of laughter, tears, drama, intrigue, and more laughter. Also, he has a cat, and enjoys indoor rock climbing and outdoor camping. 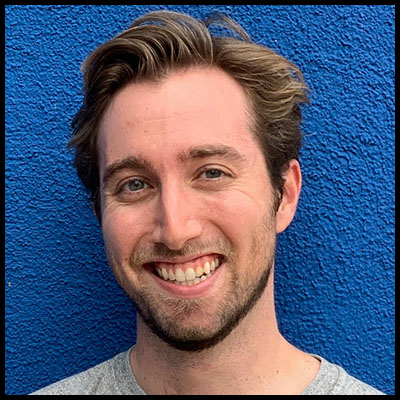 Daniel Smith is constantly playing something. If it’s not improv scenes, he’s probably playing the cello. If he’s not playing the cello, he’s probably playing jokes on his mom. If he’s not playing any of those, he’s probably playing the odds on whether or not he will get a sunburn without reapplying sunscreen after 45 minutes. He’s a risk taker. He will lose his wallet twice a month without batting an eye. He’s a class act. He doesn’t inconvenience those who accidentally call him David, Jacob, or some other basic Old Testament name—he accepts his new identity graciously. David Smith is here to play. And if you’ve seen a navy blue Velcro wallet with the words “Bad Mother-Clucker” on it, please contact us at Held2gether Improv— (562) 537-8558. 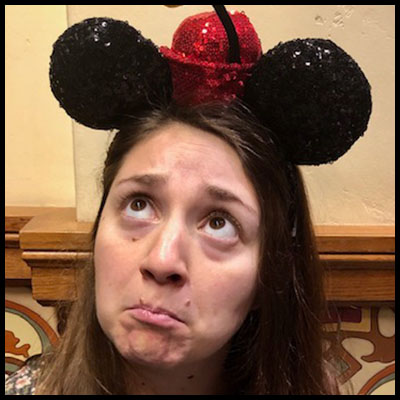 Nelli started her storytelling career at the ripe age of two, spinning yarns in the local parks of post-Soviet Russia for anyone who would listen. After moving to the U.S. just before the dawn of preschool, she turned to books to help learn the language, and she discovered her love for reading and began a neverending to-be-read list. But her own material was running dry. For years, she scribbled in her diary of the mundane happenings of prepubescent life––MASH games, lanyards, Limited Too. Then, in her freshman year of high school, her drama program introduced an improv component: ComedySportz. And so began her journey with the world of ‘Yes, and.’ But as the years of “adulting” drew near, she learned to monetize her love for storytelling, and her path took a turn toward the field of marketing. And just when she thought her years of playing pretend might have come to an end, a move to Long Beach in 2017 led her to Held2gether and its warm, fun-loving community. Now, she spends her days storytelling on-stage and off, still sharing stories with anyone who will listen (most often her loving fiancé). 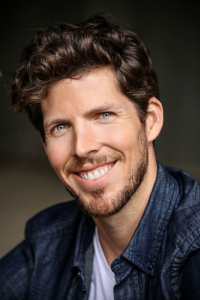 Brian Patrick Williams is a man with many names. Three to be exact. Though if you count initials and nicknames, there are many, many more. “What shall I call him then?”, you may ask. Good question. Nobody really knows but they try anyway. Brian might answer to the following: “Brian; BPW; Brian Patrick Williams; BPDubz; Beeps; Hey you!; No no bad dog!; Good boy!; You’re in the show kid.” Please note that this is not an exhaustive list and due to his incredibly fickle nature Brian may not answer to any of these. One thing is for sure, do NOT call him “Bri Bri.” That term of endearment is reserved for the Matriarch of the family only. Moving on… As you probably already know, Brian loves to perform, stage or no stage. Legend has it that he once spent over a year performing mere miles from the South and North Korean DMZ and some even go so far as to say his performances helped strengthen the cease-fire between the two countries. You may be wondering if Brian Patrick Williams is a superhero. The answer is yes, he most certainly is. However this is classified information and by reading this sentence, either aloud or to yourself, you are now sworn to secrecy and must not reveal his identity to anyone. If you do not comply with this, many three-letter agencies will get involved. So, if anyone asks, Brian Patrick Williams is just a humble actor sharing his love of storytelling with the world.